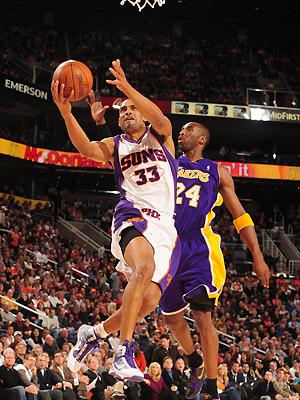 The problem with consistency is that sometimes it’s taken for granted.

One becomes so accustomed to it, that it becomes expected. Therein exists the rub with Grant Hill.

Unassuming and matter-of-fact, Hill virtually has gone unnoticed during this recent hot streak by the Suns. The Suns co-captain has helped propel Phoenix to an 8-2 record in their last 10 games, while averaging 15.5 points, 6.4 rebounds and shooting 52 percent over that stretch.

It is a decent little hike in the 15-year veteran’s scoring average this season, which currently rests at 11.8. Hill averaged 12 points a game last season.

But even more important for the Suns has been Hill’s ability to emerge as the backup point guard in the absence of Goran Dragic (sprained ankle) and Leandro Barbosa (wrist surgery). It’s his steadying influence on the reserves that has glued that second unit together.

So what’s been the difference with the seven-time All-Star recently to account for his little spurt?

“I don’t know really,” the Duke graduate admits. “I’m just lifting on game days. Other than that, nothing different.”

Not too long ago, the conventional wisdom in coaching was that basketball players shouldn’t lift too many weights because it would mess up their shot. Then, as the game evolved and weight training became more sophisticated, ballplayers such as Karl Malone and Tim Hardaway became renowned for pumping lots of iron.

Then, like he always did, Michael Jordan revolutionized when to lift weights. Contemporaries of Jordan also lifted during the offseason and some even kept up with it on their off-days during the season, but the rule was never to lift on a game day.

Jordan, as well as fellow Bulls teammates Ron Harper and Scottie Pippen, formed a little group that they nicknamed “The Breakfast Club.” The group would get together on game days and lift weights the morning of the game.

“The Breakfast Club” credited their morning workouts with improved flexibility and for a boost of energy for the game later on that night. Hill can attest to similar results.

“It helps me get legs and body moving a little bit,” Hill said. “We don’t practice as much and usually I do those lifts on off-days, but I’ve been using those off-days for rest and coming in early and getting a lift in. My body usually feels pretty good after a lift and it’s helping because I feel really good at night during game time.”

Hill has even begun using the method to help power him through back-to-backs. He lifted before the Clippers game Wednesday and totaled 16 points and eight boards, only to come back the next night to notch 17 points and seven rebounds.

The only two-time winner of the NBA’s Sportsmanship Award says that he lifts at 8:30 in the morning on game days, usually before shootaround. There has been an even more dramatic spike in his numbers over the last four games, averaging 18.5 points and 7.8 rebounds a game over that span.

But the 38 year-old forward isn’t crediting just the lifting for his improvement.

“It’s the meditation,” he joked as he made a yoga-like motion with his hands.

But maybe a mental adjustment wasn’t too far from the truth?