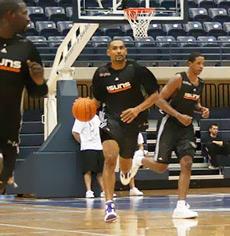 Pulling himself up off the deck after taking a charge is nothing new to Grant Hill. Doing it multiple times in the Suns’ first full-contact session at training camp is another matter.

Still, that sums up the competitive spirit of the 16-year veteran, a spirit that is by no means tamed, even in intra-squad scrimmages.

"With the season around the corner, it’s important to play all out," Hill explained."You want to show up and work hard. And that's what we've done. Coach (Alvin) Gentry has acknowledged that and said guys have worked hard and haven't complained about it. We've come out and handled business. We're trying to improve on some things, but so far the effort has been great. That's the important thing. As long as you have great effort, you can always get better and camp will be productive. You want to get off on the right note.”

That sentiment is shared by teammate Steve Nash, who has certainly appreciated the Duke alum’s contributions to the Suns over the last two years.

“Grant is fantastic,” the point guard said. “He's such a great professional and a terrific player, but he's also a smart teammate. He has all the intangibles, let alone his obvious skills. The fact he has overcome so much in his career, he is one of my all-time favorite teammates.”

Hill escaped the injury bug last season, playing in a team-high 82 games, before re-signing with the club over the summer.

“Going through a tough season here last year made me want to stay even more,” Hill said. “We as players bonded. We didn't get to the playoffs and it certainly wasn't a Hollywood story at the end, but coming together will hopefully help us this season. For me, this just feels right, and I'm glad I did come back.”

As for the rest of the team trying to match Hill’s level of intensity this early in the preseason, it’s a safe bet that will occur sooner rather than later.

“Alvin and the rest of the coaching staff,” he continued, “they have a good feel for what we need, knowing when to let up a little bit. It's a fine line. You want to get things done and accomplish as much as you can. You don't want to kill people out here. It's hard to be subjective since I'm one of those running around here, but I like the three days of two-a-days. Preseason is next week, so we'll have to see when we throw it up for real.