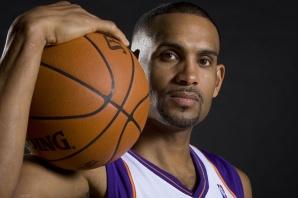 For a stretch of about six seasons, it seemed as if injuries would put an early end to Grant Hill's basketball career. Now, Hill is 37 years old and coming off the only season in his career in which he played in all 82 games.

He spoke with us about taking care of himself, giving his career new life and what he learned from the adversity:

Question: Is it true you've adopted Steve Nash's diet?
Answer: No! He and I have different diets. I don't know how he gets credit for having a healthy diet. He's not the only one. I think it's because Shaq coined it the Nash Diet. But the good thing about Steve, aside from our similar interests off the court, is that we're both particular about taking care of our body. We run things past one another. I certainly have learned a great deal from him, and hopefully he's learned from me. One of the common themes is we watch what we eat. Everybody's body is different, but I don't eat the way I did when I was younger.

Q: What have you cut out?

A: My first year in the NBA I ate nothing but fast food. There was a street in Michigan near my home that had seven or eight fast-food places. I went eeny-meeny-miney-moe. I got a chef my second year, but I still kept two or three pitchers of Kool-Aid in the refrigerator. And of course we had to have Sprite (which Hill endorsed commercially). And we made lot of cakes. So I would go to bed with a quarter of a cake and a Big Gulp-sized container of Kool-Aid. I'd take that to bed with me.

Q: When did you change?

A: It was gradual. At one point, I cut out all drinks except water. That's when I started getting away from some of that. I was still eating red meat, less pasta. As I've gotten older and become more educated about it, I've slowly changed. My wife (Tamia) and I practice a macrobiotic diet. (A macrobiotic diet eliminates processed foods and emphasizes water, vegetables, fruits and organically grown grains, such as brown rice. It typically does not include red meat, dairy or eggs.) It's hard to eat like that on the road, but you want to try to make healthy decisions. When we get on the plane after the game and the options are turkey with mashed potatoes and yams, or a Cobb salad with chicken, I'll get the salad. I drink a lot of water. It's just understanding what you put in your body and how it will affect your energy level.

A: It's a long season. You go to cities where you have favorite restaurants and you cheat a little bit. I think Jared (Dudley) said I'm maybe 75-25 (percent) whereas Nash is 90-10. If that's the case, I'm not on the Nash Diet. I'm on the Hill Diet.

Q: Has it helped you on the court?

A: Just getting rest, eating correctly, for me personally, last year especially, allowed me to do some things out there I haven't done for a long time. There were things I did last year on the court where I said, 'I haven't done that in 10 years.' It might have been a cut, or guarding somebody and being able to anticipate where they're going and being there. Four or five years ago, I used to say the spirit was willing but the flesh was weak because I'd want to get there I just couldn't get there. But now I'm getting there.

Q: Are you thinking of playing beyond this contract?

A: You know, when I was young I watched Joe Dumars play when he was 34 and I used to ask him, 'Man, why are you still playing? When I'm 34, I'm done.' I think the combination of three things, missing a lot of time, having a real good support group here with this organization and then just taking care of myself have helped. Getting my rest. Not drinking alcohol. Eating correctly. And those years when I was out with an injury, watching my weight. I always thought all of that would pay off on the back end. One thing I'm interested in is athletes who have dominated or continued at a high level late into their 30s and early in their 40s. (Surfer) Laird Hamilton. Chris Chelios in hockey. (Olympic swimmer) Dara Torres. Certainly John Stockton when he played. Lance Armstrong. Genetics play a role, and luck. But the common theme is those people work at it. They make sacrifices in their lifestyle and diet. They do everything legally you can do. And you know what? It almost seems like, every year I feel more in control, more aware and have more of an understanding of what it takes. I feel good. I'm able to keep up. I may miss shots and make turnovers, but I feel like I can still run up and down with these guys. So, we'll see. It would be nice to have an option this summer, and I'll take it one year at a time.

Q: When you had your ankle reconstructed and your heel rebuilt, would you have imagined you'd still be out here pushing 40?

A: Honestly, I think I told myself I'll make up for all of it on the back end. (Laughing) I probably thought the back end would have been over a few years ago! I don't know if I believed that totally, but sometimes when you can't see the light at the end of the tunnel you need something to keep you going. I would tell myself that, and my dad would tell me he believed it.

Q: Do you have more appreciation and get more enjoyment from these years after what you had to go through?

A: Yeah. I've accepted what happened. It certainly wasn't easy, but I'm not bitter about it. This is such a privilege to do what we do, every day you come out here. I tweaked my ankle the other day and missed the (Portland) game, and I was miserable. You want to be out there every time. You don't want to miss a game or a practice just because when this over, it's over. And also, I'm kind of proud I've been able to sort of change my game, going from a player who was at a high, high level and counted on to do certain things for his team, and now being able to still do some of those things, but play defense, take charges, do some of the little things. I've been able to redefine my game and my role. That's not always an easy thing to do when you've been to the mountain top and you kind of have to humble yourself. I've learned more about myself through all the adversity and all the tough times, about my love for the game, perspective about what's important and just values and lessons that apply to life. Prior to that, things were pretty easy. A lot of success early. All of a sudden, I had to lace on my shoes and go fight. I'm still fighting.