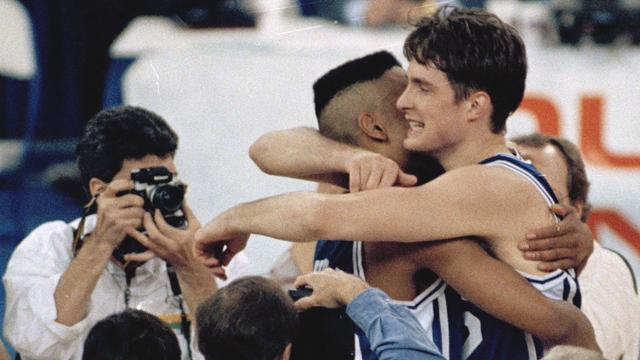 The film is available to watch on iTunes.

Former Duke All-Americans Grant Hill and Christian Laettner are teaming up with Turner Sports to offer viewers an inside look at one of the most-storied college basketball programs. The first-of-its-kind documentary for Turner Sports, Duke 91 & 92: Back to Back will air on truTV on at 8 p.m. ET on NCAA Selection Sunday, March 11, in advance of Turner Sports’ and CBS Sports’ coverage of the 2012 NCAA Men’s Division I Basketball Championship, which airs exclusively on TBS, CBS, TNT and truTV.

An hour-long documentary, Duke 91 & 92: Back to Back will revisit 1991 and 1992, when the Blue Devils became the first school in nearly 20 years to win back-to-back national championships. Key moments featured in the film include the upset win against undefeated UNLV in the 1991 Final Four, Laettner’s buzzer-beating jump shot against Kentucky in the 1992 East Regional Final, the repeat national title victory against the “Fab Five” of Michigan and the emotional 20-year reunion that took place where it all began -- Cameron Indoor Stadium.

The film offers a unique perspective of those seasons by examining the key players, a Hall of Fame coach and memorable moments from an era that helped set the stage for the school’s reign as college basketball’s most influential and successful program, on and off the court, of the past 20 years. Along with Hill and Laettner, Duke 91 & 92: Back to Back includes interviews with former Blue Devils Clay Buckley, Ron Burt, Marty Clark, Bobby Hurley, Greg Koubek and Erik Meek, filmed when they returned to Durham, N.C. in September 2011 on the eve of the Duke Hall of Fame induction of Bobby Hurley, the Most Outstanding Player of the 1992 Final Four, and coach Mike Krzyzewski. 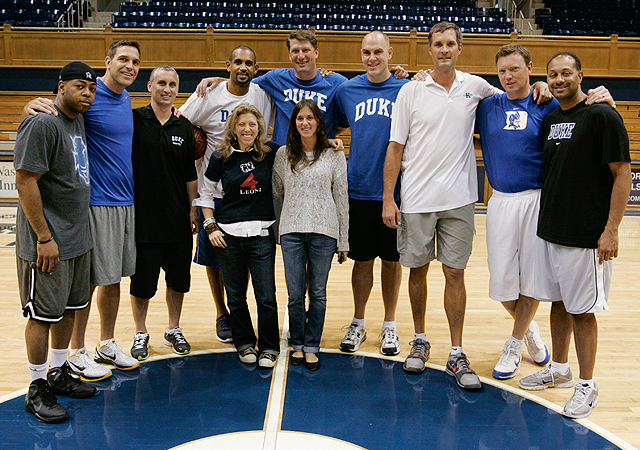 Grant Hill compiled a most impressive collegiate career at Duke, winning back-to-back NCAA championships his freshman and sophomore years (1991 and 1992), plus a host of other collegiate awards, including the Henry Iba Corinthian Award as the nation’s top defensive player (1993). In his senior year, Grant was named a unanimous first team All-American, was named to the NCAA All-Tournament team and was the NCAA Southeastern Regional MVP. Additionally, Grant was ACC Player of the Year and led Duke in scoring (17.4 points per game), minutes (35.7), assists (176) and steals (64).

After graduating from Duke, Grant was the No. 1 pick by the Detroit Pistons in the 1994 NBA Draft. For his first two seasons in the league, Grant led all players in All-Star votes. As co-NBA Rookie of the Year, Grant also was a member of the gold-medal winning Team USA "Dream Team" at the 1996 Olympics in Atlanta.In April 2011, the Basketball Hall of Fame announced that Grant was elected to a three-year term on the 22-member Board of Governors. Grant is the first and only active player to ever serve on the Board.

Off the court, Grant has been working hard on projects he is passionate about. He established the Calvin Hill Scholarship Endowment Fund at the Duke Divinity School in honor of his father, the Grant Hill Achiever Scholarships in Orlando and Detroit (scholarships to assist students in pursuit of an undergraduate education) and made major contributions to Habitat for Humanity. Grant was awarded the 2001 Richard and Helen DeVos Community Enrichment Award and served as vice-chairman of the 1999 Special Olympics World Games. In 2010, President Barack Obama named Grant as a council member on the President’s Council of Fitness, Sports & Nutrition. Grant also is involved with the First Lady’s “Let’s Move” campaign.

Christian Laettner had one of the greatest college careers in history, winning two NCAA championships and multiple national player of the year titles, including the John R. Wooden Award. Christian was the only non-NBA star selected to play for the legendary 1992 Dream Team at the Barcelona Olympic Games. Christian was selected by the Minnesota Timberwolves as the third overall pick in the 1992 NBA Draft, making him the highest draft pick the Wolves had ever selected. As a rookie, he led the Wolves in games played and started (81). In his first NBA season, he earned a spot on the All-Rookie Team.

In his second year with the Timberwolves, he led in scoring (16.8 ppg) and rebounding (8.6 rpg) and after three seasons with the Timberwolves, he was traded to the Atlanta Hawks. Christian was the only Atlanta player to start all 82 games and was on the 1997 All-Star Team. He went on to play with four more teams, the Detroit Pistons, Dallas Mavericks, Washington Wizards and Miami Heat.In 2005, after 13 seasons, Christian retired in order to spend more time with his non-basketball pursuits and passions. While in the NBA, Christian and Brian Davis, another former Duke player, developed Blue Devil Ventures, a community development company whose focus is on revitalizing areas of downtown Durham, N.C.

Additionally, Christian has a strong interest in supporting the growth of other athletes. Through his success with Blue Devil Ventures, Christian helped endow a men’s basketball scholarship and a new athletics facility at his alma mater. Christian developed the Christian Laettner Basketball Academy, which provides a fun, learning environment for devoted basketball players who are interested in improving their game.

Amy Unell, a native of Kansas City, was an Emmy-nominated producer for NBC's Today Show for more than six years. Unell produced and directed the feature documentary, Starting at the Finish Line: The Coach Buehler Story, narrated by executive producer Grant Hill. She was a 2009-2010 Media Fellow at Duke’s DeWitt Wallace Center for Media and Democracy at the Sanford School of Public Policy. Unell created and taught an undergraduate production course at Duke in Spring 2010. She is the author of the book, Starting at the Finish Line, to be published by Perigee/Penguin Group USA in Summer 2012.

Madeleine Sackler is the founder of Great Curve Films, based in New York City. Madeleine directed, produced, and edited The Lottery, a feature documentary which aired on Showtime and was on the shortlist for the 2011 Academy Awards for Best Feature Documentary. She is currently in post-production on Unstable Elements, a feature documentary following an underground resistance group called the Belarus Free Theater (executive producer, Sir Tom Stoppard). Previously, Madeleine was a freelance editor for television, commercials and documentaries. 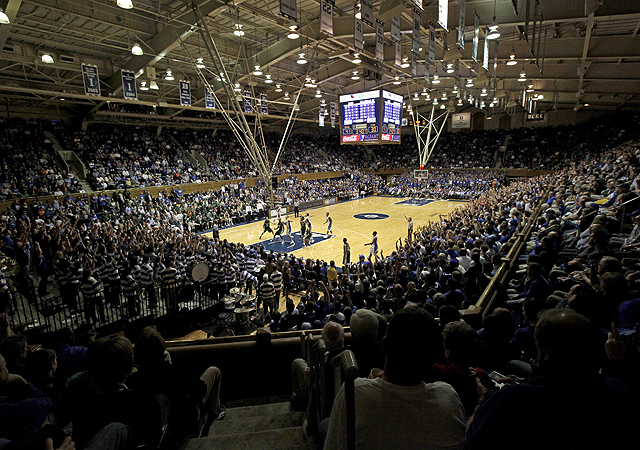 Duke University's Cameron Indoor Stadium, the crown jewel of college basketball's classic venues, was conceived on the back of a matchbook cover in 1935 and renovated in the late 1980s. Cameron underwent a series of improvements over the summer of 2009 to enhance the gameday experience, while also retaining the revered qualities of the facility in its 73rd year as the home of the Blue Devils.

For seven decades, spectators, players and coaches have understood the unique magic of the Indoor Stadium. It's the intimacy of the arena, the unique seating arrangement that puts the wildest fans right down on the floor with the players. It's the legends that were made there, the feeling of history being made with every game.

Duke's Indoor Stadium was officially opened on January 6, 1940. The building was dedicated to longtime Duke Athletic Director and basketball coach Eddie Cameron, a legend in his own right, on January 22, 1972.

Originally the largest indoor arena in the South, Cameron is today one of the smallest in the nation. Nevertheless, its stature grows from year-to-year. Sellout crowds, top 25 rankings and championships of every variety have become the norm. The "creative harassment" of student spectators has given Duke the honor of being known as "one of the toughest road games in the USA," according to USA Today and any visiting team that has ever played in Cameron. In its June 7, 1999, issue, Sports Illustrated rated Cameron Indoor Stadium fourth on a list of the top 20 sporting venues in the world in the 20th Century, ranking ahead of such notables as Wrigley Field, Fenway Park and Pebble Beach Golf Club.

Despite the changes that have taken place, Cameron Indoor Stadium has remained very much the same over the last 70+ years. New seating, high tech electronics and a fresh coat of paint have not altered, but rather enhanced, Cameron's most enduring characteristic ... its spirit. It is still a building of superlatives.